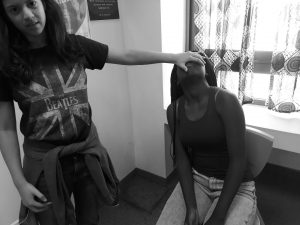 In the photograph, there is a white girl with her hand on the face of an African-American, maybe oppressing her or not letting her accomplish a certain objective. That can be seen because the white girl’s face covers the African-American’s eyes and mouth, probably in order to don’t let this African-American see or speak, which can be interpreted as a control situation, since people that don’t see their surroundings or don’t express themselves because of dissatisfaction, are usually afraid or under control of some kind of authority or hierarchy that has been set.

An important detail or strategy to be noticed is that the girl who is being oppressed in the picture does not react violently to the white girl’s actions, which would be a sign or possibility of the belief and practice of nonviolence, leading to the thought that the African-America in the photograph might be a protester or someone that believes in social change and the Civil Rights. That can also be seen because the white girl wears a “Beatles” shirt, a famous band from the 1960’s, an era of a big amount of Civil Rights movements such as the Sit-ins in lunch counters and the Freedom Rides.

Another detail of this photograph is that the white girl seems to be talking, with a facial expression that can be interpreted as: “Do not listen to this other girl” or “Just ignore her”, which may represent a general way of thinking or attitude of white people. The location of the photograph seems to be a school, where some white students had to interact with African-Americans. This would be important because schools were usually places of racism and that would sustain the hypothesis of oppression against the African-American in the photograph.

Welcome to your brand new blog at Edublogs!

To get started, simply visit your blog’s dashboard, edit or delete this post and check out all the other options available to you.

We can walk you through step-by-step in our guide to getting started with your blog.